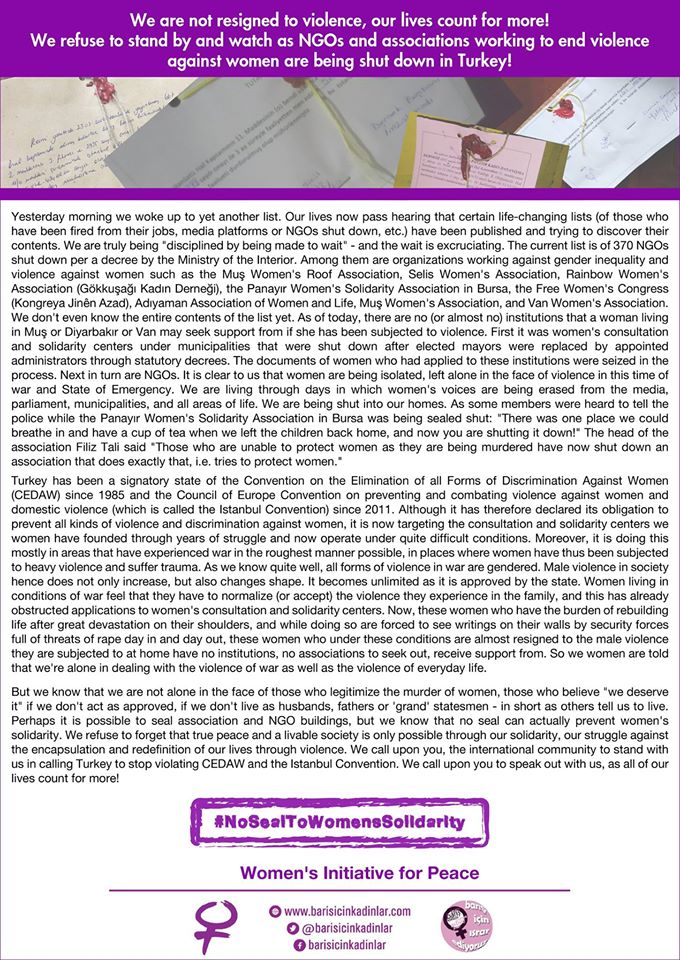 We refuse to stand by and watch as NGOs and associations working to end violence against women are being shut down in Turkey!
Yesterday morning we woke up to yet another list. Our lives now pass hearing that certain life-changing lists (of those who have been fired from their jobs, media platforms or NGOs shut down, etc.) have been published and trying to discover their contents. We are truly being “disciplined by being made to wait” – and the wait is excruciating. The current list is of 370 NGOs shut down per a decree by the Ministry of the Interior. Among them are organizations working against gender inequality and violence against women such as the Muş Women’s Roof Association, Selis Women’s Association, Rainbow Women’s Association (Gökkuşağı Kadın Derneği), the Panayır Women’s Solidarity Association in Bursa, the Free Women’s Congress (Kongreya Jinên Azad), Adıyaman Association of Women and Life, Muş Women’s Association, and Van Women’s Association. We don’t even know the entire contents of the list yet. As of today, there are no (or almost no) institutions that a woman living in Muş or Diyarbakır or Van may seek support from if she has been subjected to violence. First it was women’s consultation and solidarity centers under municipalities that were shut down after elected mayors were replaced by appointed administrators through statutory decrees. The documents of women who had applied to these institutions were seized in the process. Next in turn are NGOs. It is clear to us that women are being isolated, left alone in the face of violence in this time of war and State of Emergency. We are living through days in which women’s voices are being erased from the media, parliament, municipalities, and all areas of life. We are being shut into our homes. As some members were heard to tell the police while the Panayır Women’s Solidarity Association in Bursa was being sealed shut: “There was one place we could breathe in and have a cup of tea when we left the children back home, and now you are shutting it down!” The head of the association Filiz Tali said “Those who are unable to protect women as they are being murdered have now shut down an association that does exactly that, i.e. tries to protect women.”
Turkey has been a signatory state of the Convention on the Elimination of all Forms of Discrimination Against Women (CEDAW) since 1985 and the Council of Europe Convention on preventing and combating violence against women and domestic violence (which is called the Istanbul Convention) since 2011. Although it has therefore declared its obligation to prevent all kinds of violence and discrimination against women, it is now targeting the consultation and solidarity centers we women have founded through years of struggle and now operate under quite difficult conditions. Moreover, it is doing this mostly in areas that have experienced war in the roughest manner possible, in places where women have thus been subjected to heavy violence and suffer trauma. As we know quite well, all forms of violence in war are gendered. Male violence in society hence does not only increase, but also changes shape. It becomes unlimited as it is approved by the state. Women living in conditions of war feel that they have to normalize (or accept) the violence they experience in the family, and this has already obstructed applications to women’s consultation and solidarity centers. Now, these women who have the burden of rebuilding life after great devastation on their shoulders, and while doing so are forced to see writings on their walls by security forces full of threats of rape day in and day out, these women who under these conditions are almost resigned to the male violence they are subjected to at home have no institutions, no associations to seek out, receive support from. So we women are told that we’re alone in dealing with the violence of war as well as the violence of everyday life.
But we know that we are not alone in the face of those who legitimize the murder of women, those who believe “we deserve it” if we don’t act as approved, if we don’t live as husbands, fathers or ‘grand’ statesmen – in short as others tell us to live. Perhaps it is possible to seal association and NGO buildings, but we know that no seal can actually prevent women’s solidarity. We refuse to forget that true peace and a livable society is only possible through our solidarity, our struggle against the encapsulation and redefinition of our lives through violence. We call upon you, the international community to stand with us in calling Turkey to stop violating CEDAW and the Istanbul Convention. We call upon you to speak out with us, as all of our lives count for more!
#NoSealToWomensSolidarity
Women’s Initiative for Peace